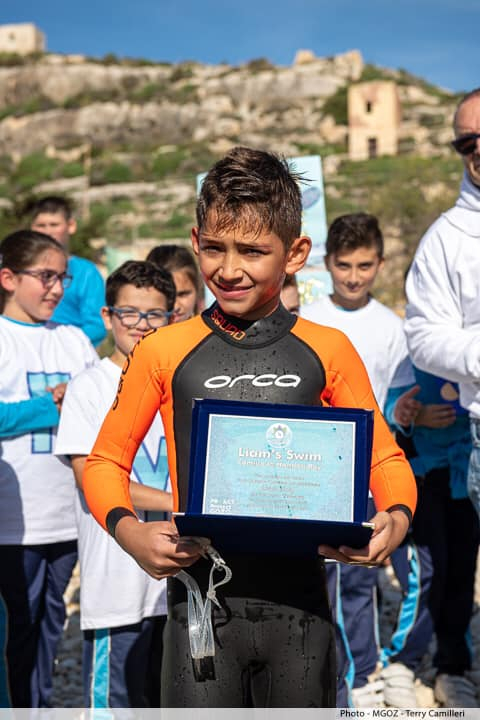 Liam is quite the little athlete, and trains with Shamrock Stars Sports Club. He tells us all about his preparations to face the feat. “I love swimming and I participate in swim races and aquathlons for kids with Malta Triathlon Federation, so I decided to do this as a challenge while also doing it for a good cause because I love animals, especially dolphins.”

Liam shares that he has been training in the sea and in pools since the summer, but found it a little difficult lately. “It has been a bit hard to train in the sea lately because of bad weather. So I trained mostly on land by doing cardio focusing on endurance.”

Swim day came last Friday and was successful, despite a few obstacles. “I was ready for it but unfortunately on the day, the wind became unpredictably strong and I faced Force 4 to 5 Southwest winds with 1.3m waves. As I was crossing, especially in the middle part, I encountered lots of currents which turned the swim from a 1.3km swim to a 1.84km one.”

“I’m thrilled to have been able to finish it and I was amazed by all the people I found cheering me on at Hondoq Bay,” he said, seeing family, school friends, and even people he didn’t know there. His parents expressed how proud they are of their son, who explained it was a dream of Liam’s to do this. “We helped him turn this wish into reality while combining it with something close to his heart,” they say, hoping that their son’s actions will inspire other kids and society in general to take up a sport and also keep the environment clean.

“My message to other kids is to never give up and to protect our sea and its creatures that are suffering the consequences of plastic pollution,” he shares. “I hope that I managed to make them more aware of the problem and to encourage them to use less plastic.”